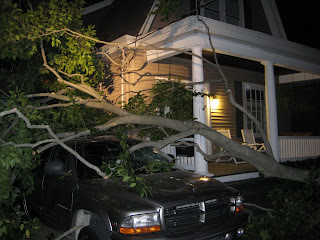 About a year ago I received a call from my neighbor. He sounded as if something was wrong; “Where are you” he asked? I informed him that I was away from home at the moment but was there something I could help him with. “Yeah, you can come get your huge tree limb off my SUV!” I immediately turned around and headed home. Once I got there I saw what is pictured here in this blog post. Because of heavy winds my huge front yard tree had dropped a limb and totally smashed the top of my neighbor’s vehicle. He and I spent the whole next day cutting away at the tree limb so that we could eventually tow his car to a body shop.

Now my neighbor lives next door to an insurance man so he was already well versed in whose insurance takes care of the damages to his SUV but for those of you that are not as privileged to live next to an insurance man I thought I would explain. Even though it was my tree that caused the damage my homeowner policy would not be involved in paying for the damages. In order for me to be responsible I would have to be negligent in some way but since it was an “act of God” (wind) negligence could not be pointed at me. Therefore, the coverage for the damage to his vehicle would fall under his personal auto policy. More specifically it would be his comprehensive or “other than collision” coverage. Since this coverage usually has a deductible (the amount the policy holder has to pay out of pocket before the insurance company takes care of the rest) I offered to help pay the amount he would have to pay out of pocket. I was not required to do this but since I like my neighbor and it was my tree, I felt it was the right thing to do.

There is, however, one situation that could have made the tree limb fall my fault. If for some reason my neighbor felt that my tree was unhealthy and dangerous he could compose a letter and “send receipt” a letter to me (meaning upon delivery I would have to sign a document stating I had received the letter). In the letter he would have to state that he felt my tree was in danger of falling and causing damage to his property. If that had been the case and my neighbor had sent me the letter he could have had grounds that I was negligent. This in turn would cause my homeowner policy to pay out for his damages and not his personal auto policy.

By the way, my tree is very healthy so there is no need for my neighbor to write a letter.
Posted by Fey Insurance Services at 12:27 PM

"Symantec Tuesday warned that advertisers, analytic platforms, and other third parties may be able to access Facebook users' personal information using inadvertently leaked application tokens. The security company advised Facebook users to change their passwords on the social networking site in order protect their accounts from being mined.

Facebook said it has fixed a year-old flaw, reported by Symantec, that caused iframe applications to inadvertently leak access tokens. Those tokens can be used maliciously to get at users' profiles, photographs, and chats, as well as for posting messages -- which could include links to malware sites -- to their Facebook pages.

Facebook's fix, however, has only stopped the leak; the aforementioned tokens still reside in log files of third-party servers or are still being actively used by advertisers. Symantec estimated that as of April of this year, close to 100,000 applications were enabling the leakage: "We estimate that over the years, hundreds of thousands of applications may have inadvertently leaked millions of access tokens to third parties.

Details of how the leak works is viewable in Symantec's blog."

Water In Your Basement? 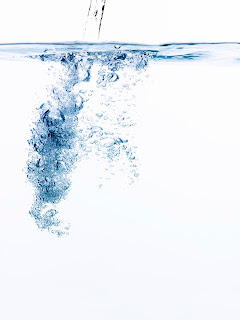 This rain has caused one common phone call for our agency this spring, “I have water in the basement”. Whether it is a home, business or rental property, water has been finding its way into places it should not be; so what better topic to blog about today than water in your basement.

The first question we are asked is whether or not it is covered. This depends on a few factors. The two main factors are the source of where the water is coming from and the type of insurance policy you have. If water is coming into your basement through window wells or other opening in your basement (excluding drains), then that would be considered a flood loss which often is not covered by your normal insurance policy. In fact, even if you had a flood policy it normally doesn’t cover contents located in parts of a building that are underground, i.e. a basement. If the water is gathering in your basement because of a sump pump failure or a backed up drain or sewer than there could be coverage, as long as you meet the second factor which is having the type of policy that covers those things. Rental property policies have the most limiting coverage for water in the basement. The main coverage you need is called “Water Back up of Sewers and Drains” and many insurance companies don’t offer that on rental properties. Commercial building insurance policies have the “Water Back up of Sewers and Drains” endorsement as an optional coverage so it just depends if you purchased that option or not if you would have coverage. Homeowners polices more often than not have the “Water Back up of Sewers and Drains” included in their basic policy but if someone tried to skimp on the premium they may have taken that coverage out.

There are a few tips that we would like to let you know about as far as dealing with such a rainy spring. First, if you don’t go to your basement very often make sure that during this time of year you do take more frequent trips for inspection purposes. If you have a sump pump, check it regularly to make sure it is functioning properly. Also, make sure that drains are clear of anything that might cause blockage.

If you do have the bad luck of finding standing water in your basement make sure to give your insurance person a call. Whether it is covered or not they would have advice as to who to call for clean up. It is a good idea to try and clean the water up as soon as you can since mold can settle in after a few days. Also, if the basement is in a commercial building that stores chemicals of any kind it might be best to stay clear from the water. The water may have caused leaked chemicals to mix and could be harmful.

If you happen to be in the service area of the Metropolitan Sewer District of Greater Cincinnati you are one of the lucky few that could get free help with your water problem. Again, depending on the source of the water, they may take care of the water clean up at no cost to you. Their phone number is 513-352-4900 and their website is http://www.call.msdgc.org/.
Posted by Fey Insurance Services at 12:16 PM