Have a Safe New Year's Eve

Being the insurance geeks that we are we want to wish you a SAFE New Year's Eve celebration and a Happy New Years! Be sure to make good decisions as you celebrate from one year to the next.

On Friday, January 1, 2010 a new law goes into effect in Ohio requiring that you turn on your lights when your wipers are on in rain, snow or fog. Failure to do so could result in a ticket and a $100 fine. A new state of Ohio law, which took effect this year, included the mandatory lights-on provision, but it allowed law enforcement to issue only warnings for six months. On Friday, the 1st of January 2010, the warnings will be replaced by tickets. The law requires drivers to turn on their headlights anytime the windshield wipers of the vehicle are in use because of precipitation.

To be safe, turn on your lights anytime there is precipitation of any sort of the windshield.

The violation is a secondary offense meaning a motorists cannot be stopped or cited only for failing to turn on their lights, but it can be tacked on to another violation such as a speeding violation in the new year.

There are two other motor vehicle laws included. One requires drivers to change lanes or slow down when there is a tow truck along the side of the road. Failure will be a third-degree misdemeanor with up to $300 fine plus court costs. The second change is to increase the speed limit for trucks from 55 mph to 65 mph on most Ohio interstates.
Posted by Fey Insurance Services at 9:02 AM

Happy Holidays from The Fey's! 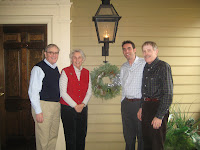 Christmas Day is only a couple of days away. We at Fey Insurance Services hope you have a safe and wonderful Holiday with your family and friends. Our office will be closed on Christmas Eve and Christmas Day. However, you can always reach us via email. Another way to get a hold of us is through our website at http://www.feyinsurance.com/. Our revamped website allows you to request policy changes, pay bills and report claims 24 hours a day.

Traveling Over the Holiday?

Many of you will be leaving home and travelling for the Holidays. Typically people will turn back their heat to conserve energy and save money. But turning your thermostat lower than the mid 60's could be like turning the heat off if we get a real cold spell. Low or no heat could cause your water pipes to freeze and that could be real problems for your house and personal property. So, if you are planning on being away from home for a period of time consider the following: (1) keep adequate heat in your home by leaving your thermostat in the mid 60's, (2) consider turning your water off at the main water valve and draining your pipes by then turning on facets and flushing toilets, (3) have a neighbor check on your house while you are way, and (4) if the service is offered, notify your local police department to keep an eye on your home as they patrol your town. Have a wonderful Holiday Season!
Posted by Fey Insurance Services at 9:17 AM

The 2010 calendars should be waiting for you in your mailbox over the next couple of days. If you wish to have a second, third or fourth please let us know. We have a few extra in stock. We also have our wall calendars still available so please feel free to call or just stop by and pick some extra ones up. We always like to have a reason to have you stop by the office and chat.
Posted by Fey Insurance Services at 2:21 PM 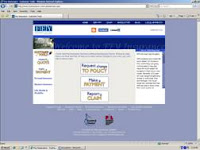 With the help of our IT department we have stepped up the capabilities of our website. If you are a Fey Insurance Services customer you can now go into our website and click on "Customer Tools" and have 24/7 access to our agency. From the "Customer Tools" link you are able to either make policy change requests, pay your insurance premiums or report a claim. So often nowadays people remember that they needed to call us late in the evening. Now they can go to http://www.feyinsurance.com/ and either make that policy change request that they forgot to call in or submit a payment that is due that day.

GPS systems have made life much easier for drivers to find where they are going. Unfortunately it has also made life much easier for burglars to track down your house. Recently a 23 year old was caught burglarizing homes in northwest Ohio and Michigan. He would break into vehicles that had GPS devices in them while they were parked at restaurants and cinemas. He would then steal the GPS device along with the garage door remote. Later he would use the GPS device to locate the home and then gain entry in the home by using the garage door remote. The young man had struck ten home prior to being caught.

Fey Insurance's recommendation for individuals that own detachable GPS devices is to never leave the device out in the open when you are not in the car. Even if you are just going in for dinner at a restaurant or for grocery shopping, we suggest you hide the device in your glove compartment or take it with you when you leave the car. A second suggestion is to use a nearby location as your "home" and not your actual home address. This way the burglar would not be able to track down your exact house if they did happen to steal your GPS device and garage door remote.
Posted by Fey Insurance Services at 2:36 PM 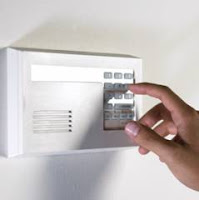 On a daily basis you see ads on TV for home security systems. We at Fey Insurance highly recommend the installation of a Home Security System to add additional protection for you and your family. Insurance will work to put your property back in place after a fire or burglary, but a Home Security System will work to prevent or minimize the effects of that fire or burglary. If you are interested in such a Home Security System, please call us and we will tell you our opinion of the various manufacturers and what features to consider. For example battery backups are usually included in Home Security Systems, but we would also recommend cellular backups for your system in the event your normal phone service goes down or even disabled by a potential burglar. We would include carbon monoxide detectors in your system especially if you have a natural gas furnace or hot water heater. Central station monitoring is preferable to systems that go directly into a police or fire dispatch. Both are considered superior to a system that only sounds a local alarm in your home. There are discounts on your Homeowner policy for the installation of a Home Security System. Please call us to review those discounts. But the most important reason, in our opinion, to install such a system is for additional security for your family and peace of mind that you are doing everything to protect your family and your property.
Posted by Fey Insurance Services at 10:28 AM